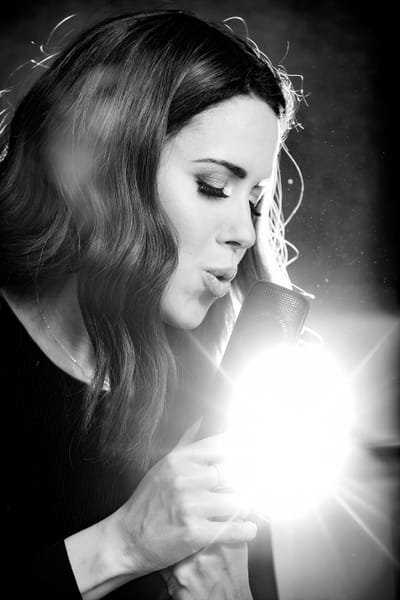 Bracha is a well- known musical star among Jewish audiences, producers and musicians across the globe. Her masterful singing encompasses a colorful blend of material, always evoking powerful reactions from her listeners. On the same night, her audiences will cry along with her soul stirring ballads and dance exuberantly from her upbeat songs. She is clearly a singer with passion, although this young wife, mother and nurse practitioner insists that singing does not define her.

Music for Bracha is not about performing or being a celebrity, but rather her connection to the song, the music and the audience. When she performs, her adrenaline pulses from connecting to the crowd and sharing a message of beauty, hope, and positivity.

Growing up in Brooklyn, NY, Bracha was exposed to music at an early age. As a teacher, her mother used the accordion to accompany her lessons, and her father, an acclaimed ba’al tefilah, played the trumpet. One of her brothers is a chazzan, while the other plays guitar and saxophone. Bracha herself was drawn to the piano and began playing at the age of six. It was then that she realized she had tapped into her life-long passion: Music.

“I realized I loved to sing and begged my parents for voice lessons,” she recalls. “I began training with a voice coach who believed in me so completely and gave me the confidence that I was going to be a great singer. She was the one who brought out my talent.”

Bracha went on to develop her own style and method, training with renowned vocal coaches. Her current voice is a product of her versatile training, a blend of phenomenal talent that she feels results in her voice constantly evolving and improving. “There are so many ways to build your voice,” she explains, “and so many different pathways to get to the goal.” Her personal vocal advancement gives her new tricks and techniques to pull out of a hat for a new spin on an old song, and allows her to help her vocal students achieve new heights.

Although Bracha’s fame as an elite singer is on the rise, she maintains that singing is just a hobby she pursues alongside her primary profession of nursing. In 2012, her popularity surged, after she produced her first concert “Forever” for Ezer Mizion in New York. It was a concert that showcased her grace, talent and captured her spirit. Following that show, requests for large scale performances came flowing in, the grandest, being her recent majestic 3 day performance in Israel in Biyanei Ha’umah for Ezer Mizion. She is a frequent performer for Zichron Shlome, A TIME, Bonei Olam, Dror and many other well- known organizations.

As for her song favorites, Alei Katan and Ad Heina rank among the highest. These are songs that emanate from the soul and give expression to some of Bracha’s deepest thoughts and feelings. “Ad heina is a song my grandfather always used to sing,” she reminisces, “and it carries so much meaning... V’ruach u’neshama shenafachta b’apeinu...every breath of life is a gift. Every single note I sing. It’s not mine, it’s a gift from Above. And I’m forever grateful for it.”